The range of electric cars is generally sufficient for everyday use – and charging at the workplace could play an important role in the future. This is shown by a data analysis conducted by WiSo- Researchers together with several practice partners. 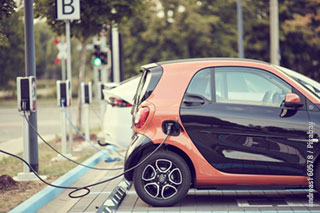 Electric vehicles are considered a central component of future mobility. One obstacle is “range anxiety” – the worry that the battery will not reach the target. But this concern is often unfounded. A team of WiSo-Researchers from the Institute of Energy Economics (EWI) at the University of Cologne has used a smartphone app to survey and investigate driving and charging preferences for nearly 5,000 trips. The result: the trips investigated rarely exceed the range of typical electric vehicles. The more than 600 participants also wanted to be able to recharge at their workplace.

Besides EWI, the project involved the IT company green|connector as well as Dortmunder Energie- und Wasserversorgung (DEW21), and the municipal utilities of Karlsruhe and Lübeck. A purpose-built smartphone app was rolled out in the utilities’ catchment areas. Using the app, users were able to record their routes over the course of a year, with a resolution exact to meter and minute. The app also made it possible to compare users’ driving patterns with currently available electric vehicle models. This enabled users to assess whether an EV would be compatible with their mobility needs and preferences. The anonymized high-resolution data provided the project partners with a revealing glimpse into future system effects of EV charging, as well as potential business models.

Commuting with electric vehicles
The data set showed that the users recorded 83 percent of their trips from Monday to Friday. From the spatial and temporal information of the data, it can be deduced that a large proportion of the recorded trips can be attributed to commuting to and from work. The distances covered for this purpose are often only a few kilometers. Users were also able to enter detailed information about their charging preferences in the app. The identified commuter profile is clearly reflected here: especially during the course of the day, after arrival at work, or in the evening, drivers want to charge their EVs. Using this information and scenarios of EV adoption, the research team can estimate the need for charging infrastructure. The data shows the charging capacity for a typical roll-out region in 2030. Depending on the specific adoption path of electric vehicles, high charging capacities are required at peak load times. These could pose major challenges for energy systems, especially at local hotspots.
In the extrapolated charging profile, the interaction of temporal and spatial components is particularly striking. In the evening, the required charging power is quite high, especially in suburbs or in the countryside. However, the peak load is even higher in the morning when commuters reach their workplaces. “Because the arrival times in the morning are less dispersed than the arrival times in the evening, the peak load in the morning is particularly high,” says EWI research associate Arne Lilienkamp, who was involved in the project together with Philipp Artur Kienscherf, Karsten Schroer and Max Gierkink. “This means that urban energy systems with many employers could be particularly burdened”.

Future business model “Workplace charging”?
Whether the impact of electric vehicles on the load profile actually takes on the form mentioned above depends largely on the availability of charging infrastructure at the workplace. Notably, users of the smartphone app are clearly interested in recharging during the day, while they are at work. This opens up an exciting business field for electricity providers: designing and operating private charging infrastructure at company locations. Based on the preferences of employees, adequate dimensioning of charging stations is possible. Charging at the workplace is also interesting for stable grid operation. Due to the long idle times, there is a great potential for flexibility, which could be exploited by appropriate regulation and business models.