Dr Felix Kölle on the influence of normative and empirical expectations. 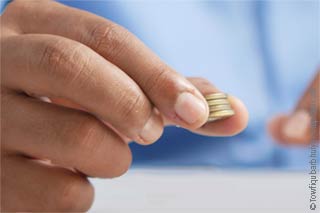 We usually know how much tipping is appropriate after a visit to a restaurant without giving it a second thought. Almost automatically, most of us offer older people a seat on the subway or train. Such mechanisms are governed by social norms without being written down. Social norms set rules for our everyday behaviour in interaction with other members of society. Most people recognise social norms as universally valid rules and behave accordingly. These rules make sense for social coexistence, but what role do such values play in an economic context?

Dr Felix Kölle (University of Cologne, Department of Economics) and his colleague Simone Quercia (University of Verona) have investigated exactly this. In Discussion Paper No. 099, of the Cluster of Excellence ECONtribute, their paper "The influence of empirical and normative expectations for cooperative behaviour" was published in June 2021.*1 They first distinguish between normative and empirical expectations. Normative expectations in this context refer to the expectation of the belief system of others, or, to put it simply, to the moral and normative ideas expected from others about how one should behave. Empirical expectations, on the other hand, refer to empirical values about the actual behaviour of others that we ourselves have gathered. An empirical expectation is, for example, to know that most people adhere to norms, but not all.

For their study, Felix Kölle and Simone Quercia conducted two experiments. In one, the test persons decide how much of their total assets (20 tokens) they want to contribute to a community project and how much they want to keep for themselves. Contributions to the community project represent cooperative behaviour, whereas amounts kept for oneself represent selfish behaviour. In a second experiment, another group is asked how much they think the participants will contribute and how morally appropriate they consider each decision option to be.

The consistent result: the subjects of the first experiment show a strong desire to match their contributions to those of others. While about a quarter of the subjects behave completely selfishly, the vast majority (three quarters of the subjects) behave conditionally cooperatively, i.e. they are willing to cooperate but only if others do the same. The behaviour pattern of conditional cooperation was also perceived as the most appropriate social behaviour by the second group. Moreover, the results show that the majority of people are also expected to adhere to this social norm. Empirical expectations thus strongly follow our learned normative guidelines.

The results of the study indicate that norms and expectations also play a fundamental role in economic contexts and thus influence our decision-making processes.

*1 In October 2021, the paper was also published in the Journal of Economic Behavior & Organization.

Planning of classroom teaching in the winter semester