We talked to Prof. Dr. Axel Ockenfels about this year's Nobel Prize for Economics awarded to Paul R. Milgrom and Robert B. Wilson, about auctions and market design. 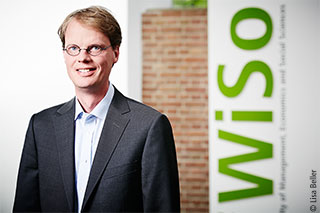 It was announced this week that this year's Nobel Prize in Economics will be awarded to Paul R. Milgrom and Robert B. Wilson of Stanford University, "for improvements to auction theory and inventions of new auction formats". We would like to ask you for a brief classification for our readers:

What have Paul Milgrom and Robert Wilson researched?

The researchers have changed both our understanding of auctions in academia and auctions in practice. They have analytically deconstructed auctions and bidding behaviour, showing how different auction procedures change prices and the selection of winners. This has consequences for all of us. When we think of auctions, we usually think of art auctions or eBay. But auctions take place in the background almost everywhere where trade takes place, and thus influence all our lives.

What are the outstanding achievements for which they have now been honoured?

The researchers have developed mathematically elegant models of auctions that have proven to be of immediate practical relevance. For example, the two prize winners have developed a multi-stage, simultaneous auction procedure which is used worldwide for the auctioning of telecommunications frequencies. The German UMTS, LTE and most recently 5G frequencies for mobile communications were also auctioned off using this auction format.

What is the significance of Milgrom and Wilson's findings for society?

The importance of auctions is difficult to underestimate. For example, they play an important role in the trading of electricity, financial papers, for the business model of the most important internet platforms, for the purchasing strategy of many companies and for the prices of countless other products. Mistakes in auction design can therefore be very expensive for a company. The collapse of the Californian electricity market a few years ago, excessive behaviour in financial markets and previous problems with the allocation of mobile phone frequencies illustrate this. In addition, well-designed public tenders are not only a source of revenue for public budgets, but can also allocate scarce resources more quickly and efficiently than costly and lengthy administrative procedures.

You recently proposed a new distribution system for medical goods in crisis, together with Robert Wilson, Peter Cramton and Alvin Roth, who won the Nobel Prize in 2012 for his work on market design. Can you outline in a few short words what this is about?

In the medical sector, of course, scarce vital protective clothing and respiratory equipment cannot simply be sold to the highest bidders in a crisis. This is also true for other challenges. Think, for example, of the allocation of scarce seminar places, kindergarten places or organ donations. But even in such cases, market design can draw on a wealth of experience. Just one example: at some universities, students are provided with an artificial currency with which the scarce seminar places can be auctioned off. Food boards are also familiar with such systems for distributing food to individual communities. The artificial currency helps to uncover shortages and to coordinate the allocation in the best possible way according to individual wishes. At the same time, however, the artificial currency ensures that it is fair and that the most solvent bidders are not simply served. Similar approaches could also be used in part in the medical sector in times of crisis. For other allocation problems, Alvin Roth has developed market mechanisms that do not require price control and are now used worldwide. There is also a research focus on this in Cologne.

What do you see as the main contributions of market design and auction theory to the future challenges facing societies?

New computer technologies allow radical and fascinating innovations in the way we communicate and interact with each other. This leads to major challenges for the future of markets, and fantastic opportunities. In Cologne, for example, we are looking at how modern market design can prevent traffic collapse, contribute effectively to climate protection, discipline high-frequency trading in financial markets, create confidence in the sharing economy and support the transition to a sustainable electricity economy. In doing so, we cooperate closely with politics and industry. There is hardly any other field in economics in which cutting-edge research and practice can benefit so directly from each other.

Dear Profesor Ockenfels, many thanks for this assessement.